Orphans 10 happened April 6-9 2016 at the Library of Congress Packard Campus for Audio Visual Conservation. Dan Strieble and Mike Mashon were the master planners. One highlight was having the Library staff pitch in to create live accompaniment for silent films.

Callard shared Music in Loop Patterns, 1975 by Reese Williams.
During 2015, twelve pieces were digitized: six letters on audio cassette between herself and Williams and six compositions on 1/4 track tape by Williams, several made with the Buchla synthesizer, all from the period of 1974-77. Many thanks to Pamela Vizner, Walter Forsberg, Bleakley McDowell, and Jasmyn Castro who each helped get this done. Listen to one at www.reesewilliams.net.

Genevieve Havemeyer-King and Pamela Oyarce presented the story of the NYU MIAP/BB Optics preservation of Some Food May Be Found in the Desert (Callard 1976) and we saw the preserved version with the audio Pamela and Callard recreated for 16mm film. See the still below, NYC in a  grime-y time.

We also saw a funny experiment by Colorlab, the sound test film that originally came with Callard's Elmo Super 8mm projector output as a 35mm print and many other gems. Brodsky & Treadway had pulled the sound off the Super 8mm and so it sounded really good. 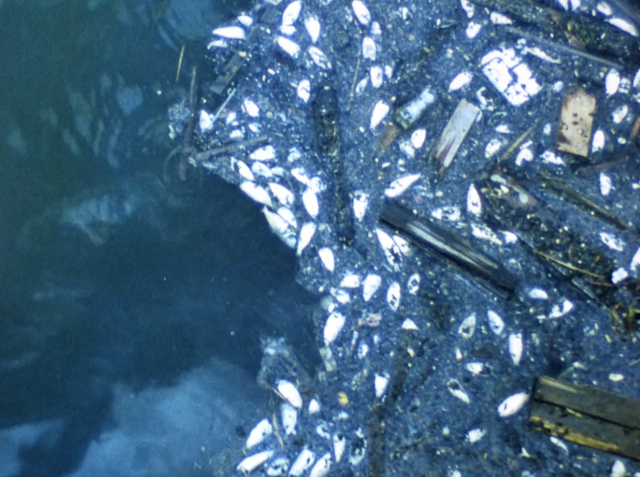